Leeds have initiated contact and made an ‘informal enquiry’ about signing Levante midfielder Jose Campaña, but are yet to make things more formal with an offer.

It’s well established that Leeds are desperate to add another central midfielder to their squad before the end of the window, with several having been linked over the last fortnight.

Udinese’s Rodrigo De Paul appeared to be at the top of the list, but their interest in him has died down after the Italian side refused to lower their demands.

The solution appeared to be a deal for Bayern Munich’s Mickael Cuisance with Leeds agreeing a fee with the German champions and a deal seemingly close to completion before it collapsed.

Another name linked was Campaña, with reports last month stating that Leeds were interested and he could be secured for €30m.

They were quickly followed up by claims that Leeds were unwilling to match that price and Marca back those up today. 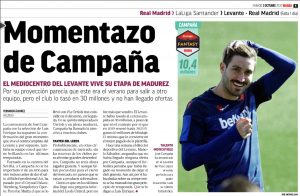 They say Leeds made an ‘informal enquiry’ about the midfielder in the last few days, but this was only a ‘survey’.

They were told by Levante that there was a €30m asking price, despite the fact midfielder actually has a €60m release clause in his contract.

How Leeds took that isn’t mentioned but their sports director Manolo Salvador confirmed last week that no bid has been made, so it’s fair to assume Marcelo Bielsa and co weren’t impressed.