Since swapping Villarreal for Barcelona in 2016, Denis Suarez hasn’t featured regularly in his first two seasons at the Camp Nou.

He’s had 10 minutes against PSV Eindhoven in the Champions League this season, plus two Copa del Rey matches, and no league appearances.

Despite the 24-year-old’s lack of minutes, he’s managed to attract interest from other clubs and journalist Miguel Rico, writing for Mundo Deportivo, mentions Chelsea are looking at the option of signing the central midfielder.

It’s claimed that Maurizio Sarri is an admirer of the Spaniard and he wanted to sign him for his former club, Napoli. The Serie A outfit failed to seal the deal for him and the Blues manager now wants to sign Suarez for the west London club.

The Catalan newspaper mentions the Premier League club have a strategy in place as they are planning to sign Suarez on loan with an option to buy. 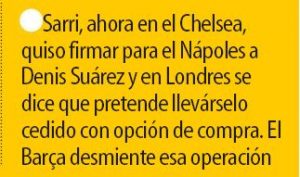 This approach from Chelsea is unlikely to yield into an outcome because Rico mentions Barca are not interested this operation.

That’s hard to believe, given the player’s game time.