Turkish newspaper Cumhuriyet claim Kasimpasa are waiting for offers for their star striker Mbaye Diagne after Southampton watched the player on Monday night.

The Istanbul club are currently 2nd in the Super Lig table, mainly thanks to Digane’s goals.

Diagne has scored 16 goals in 14 Turkish League appearances so far this season and Cumhuriyet report a scout from Southampton was present during Kasimpsa’s 2-2 draw against Fenerbache.

It’s likely the Saints will have been impressed after the Senegal international scored a brace.

Since joining Kasimpasa last January the 27-year old has scored 28 goals in 30 league appearances and Cumhuriyet claim Kasimpasa are expecting to get up to €20m for him.

Southampton have recently installed Ralph Hasenhüttl as their new manager and it’s likely they will be active in the next transfer window, with Diagne seemingly a an interesting option.

In recent weeks Wolverhampton Wanderers have been linked with Diagne, whilst Leeds United were showing a keen interest during the last summer transfer window. 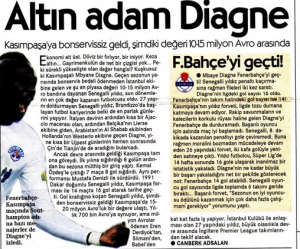