Championship side Reading are a possible destination for the Benfica midfielder Adel Taarabt, the Portuguese press reports today.

Newspaper Record brings a story calling the Royals a ‘strong possibility’ for the player, who isn’t having chances even in the Eagles’ B squad.

Taarabt could leave Benfica with a ‘friendly’ contract termination, allowing him to walk for free. That’s how the Lisbon side would get rid of the player and save €3m in salary.

Record doesn’t give any other details on how the talks between the player and Reading are going, and just mentions the chance of him moving to the Championship in the final days of the transfer window. 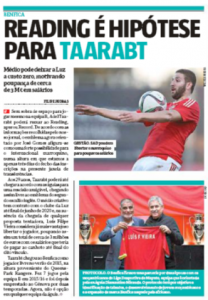 Taarabt moved to Benfica on a free transfer from Queens Park Rangers in 2015. However, he never had a chance to play for the club, and has spent his time with the B squad, besides a loan spell he had at Genoa.

The Portuguese press even linked him with a return to QPR at the end of last year, but it looks like things haven’t advanced much since then.