Home Championship Reading selling 60% of player now, other part could be bought in...
SHARE

With Tiago Ilori’s transfer from Reading to Sporting to be made official on Tuesday, newspaper Record comes up with the final details of the agreement.

The outlet claims that the negotiations ‘haven’t been easy’, and only had a happy ending due to the player’s wish to return to his old club.

Ilori is set to sign a four-and-a-half-year deal with Sporting, who paid €2.4m for 60% of his rights, Record says.

Now the contract includes a clause which allows the Lions to get the other 40% as long as they pay €1.6m more in 2020. 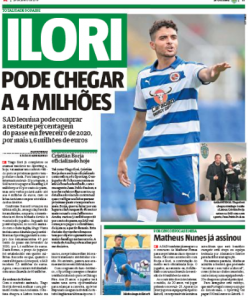 Sporting had already done a good deal when selling the player to Liverpool for €7.5m in 2013, and now that they have the player back, they’ve protected him with a €60m release clause.

Record claims that Ilori arrived in Lisbon with a hip injury, but had no problems in his medical and should be fit to feature for Sporting soon.