Rafael Benitez has split with his long term representative, Marca have revealed after speaking to the Newcastle United manager.

Manuel García Quilón had worked with Benitez ‘for many years’ explain the Spanish newspaper, but the pair recently decided to go their separate ways.

Quilón represents footballers including Real Madrid’s Theo Hernandez, Napoli’s Jose Callejon and Atletico Madrid’s Filipe Luis, so he’s hardly likely to go hungry, but the split with Benitez will be a surprise to many.

Marca insinuate the relationship between the two men has ended because Benitez sees himself more in England, and the Premier League, rather than looking for a return to La Liga. 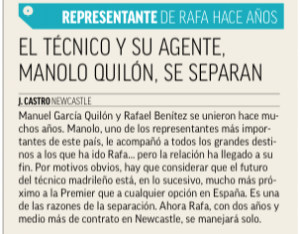 Whilst that would make sense on some levels, it’s odd they’ve split now, given Benitez previously had a long spell in England, and didn’t seem keen to leave then.

There’s no suggestion of a fall-out between the Newcastle United manager and Quilón, and Benitez hasn’t appointed a different agent.

For now, the Spaniard will represent himself.