The Catalan media were always going to have a reaction to Cristiano Ronaldo beating Lionel Messi to The Best award, even though the result was entirely expected beforehand.

Mundo Deportivo, one of the daily Catalan sport newspapers, go with the headline ‘THE BEST OR NOT THE BEST’ and then bring Shakespeare into proceedings.

‘It would be spectacular to ask William Shakespeare who is The Best, whether Cristiano Ronaldo or Lionel Messi. That is the question. If we ask the soccer family of the world who is the best, simply ‘The Best’, surely Lionel Messi would always win, until he retires, even a little later.’

Whilst it’s accepted by Mundo Deportivo that Ronaldo had a great year for Real Madrid, and his achievements mean he has to be ‘the chosen one’, any congratulations is firmly framed with: But you’re not actually The Best.

Ronaldo works harder to get the award, explains the Catalan newspaper, he values it more and pushes for individual honours, and that’s helped him get 43.16% of the vote, compared to the 19.25% going the way of Barcelona’s superstar.

The theme continues throughout Tuesday’s edition of Mundo Deportivo, the next page headlined with a quote attributed to Andres Iniesta: “CR7 deserves it but we all know who number 1 is”

Iniesta’s probable actual quote is then presented as: “People decide and vote. Cristiano is worthy of the award, but for me and many of us the number one is Leo.”

In a completely separate article (there are several), a columnist for the Barcelona based newspaper rams home the overriding point: ‘When in 30 years someone asks who was the best there will be no debate’ 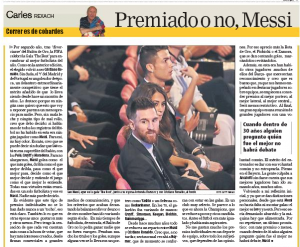 The entire concept of The Best is then torn to pieces as basically being for people who don’t really understand football and who are too simple to look at the bigger picture.

Mundo Deportivo then move on the next stance: It’s a fix anyway.

‘But I have the feeling that more and more things are going on in voting, that there are more vested interests, from commercial firms to the mass media, and that the criteria that decides the balance in favour of one or another name varies according to the year… the best is Leo and that’s it. But that would be too boring and the machine must be fed.’

The other Catalan daily, Sport, has less on the situation, but manage to fit more venom into it: ‘Cristiano won The Best yesterday. And in December he will surely win the Ballon d’Or. And thus, the greatest injustice in the history of football will be consummated.’

There’s more: ‘The Portuguese will have more individual prizes than Messi, when nobody in their right mind can deny the Argentine has been, is and will be, the best player of all time. Matching Cristiano to Messi in Ballon d’Ors (five each) is an unprecedented aberration that should embarrass the lords of FIFA, UEFA and France Football. And to all those who vote in these type of awards.’ 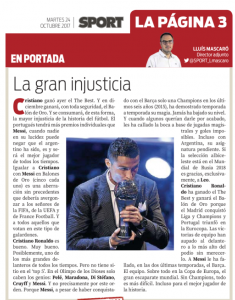 Sport’s Lluis Mascaro, who doesn’t seem to be thrilled, continued with: ‘Cristiano Ronaldo is good. Very good. Possibly one of the greatest strikers of all time. But he has no place in the ‘top 5’. In the Olympus of the Gods only the geniuses fit: Pele, Maradona, Di Stefano, Cruyff and Messi. And not precisely in this order.

‘Because Messi, despite having won only one Champions League in the last six years (2015), has shown season by season his magic. He has never lowered his level. And when some wanted to finish him, he shut their mouths with master moves and impossible goals. Even with Argentina, it’s a pending subject.’

They’ve not taken it very well.