Home Europe Radrizzani puts transfer in pipeline for Leeds – ‘One step away’ from...
SHARE

Nahitan Nandez to Leeds United continues to rumble on in the media close to Cagliari, and the pieces seem to be fitting together in this mini saga.

Initial reports stated the Premier League club were prepared to pay the player’s full €36m clause, in one go and without any quibble. That just didn’t sound realistic, given Andrea Radrizzani, or anyone really, would try to get a lower price and spread the payment.

Therefore, when claims came from La Nuova Sardegna of Leeds offering a €15m loan plus a purchase obligation of €15m in a year, that made a lot of sense. The same report also mentioned the idea of another future friendly match between the two clubs, after the one they had a couple of years ago.

At that point it didn’t feel like these claims were being grasped from thin air.

Wednesday’s edition of La Nuova Sardegna says Radrizzani has the transfer ‘in the pipeline’ for Leeds United, and is negotiating with Cagliari president Tommaso Giulini, who just so happens to be his friend. 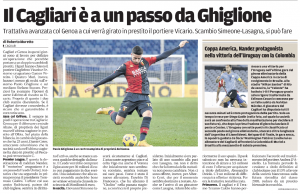 There’s confidence a deal will be done, with the newspaper saying Nandez is ‘one step away’ from moving to Elland Road.