Scouts from Championship side Queens Park Rangers had a busy weekend in Portugal, according to reports from the local press.

It seems club emissaries scouted two matches from Liga NOS, probably looking for some signings to be made in the summer window.

The big game of the weekend was Benfica’s away clash against Rio Ave. The Eagles managed to get an important 3-2 win, and now only need one point to be the league champions.

It’s O Jogo who reports that QPR had officials at the match, although it’s not revealed if they had an eye on a specific target. 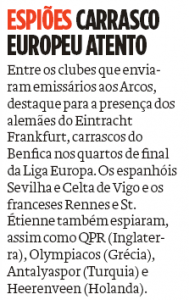 With Benfica players being quite unlikely to move to a Championship side who finished close to relegation this season, it’s more possible that QPR could be scouting for Rio Aves players instead.

Maybe a getting a little help from club partner Jorge Mendes could help the London side to get the likes of Ronan, Tarantini, Nuno Santos, since they all impressed in this game against the Eagles. 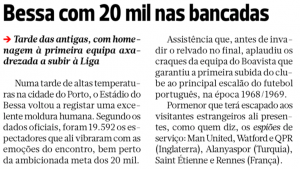 And it turns out that QPR watched a more alternative game on Saturday, as they saw Boavista beat Braga with a 4-2 score, according to A Bola.

Although the R’s haven’t been linked to players from any of these clubs lately, this is certainly a game where several targets could be found.

Goalkeeper Rafael Bracali, midfielders Nwankwo Obiora and Rafael Costa and winger Mateus have all impressed for the home side, certainly getting the attention from scouts at the match.

With QPR set to have a big rebuilding plan for the next season, it’s even hard to point out which position they need a player most. So perhaps a good weekend in sunny Portugal helped them find a few names.

West Ham and Aston Villa rejected, after it was claimed Hammers were close to deal

Tottenham losing interest in signing despite efforts – Player may have...

West Ham and Aston Villa rejected, after it was claimed Hammers...