Liverpool FC have set a price for the permanent sale of Rafael Camacho, according to reports from Portugal this Monday.

Although most of the claims regarding the winger’s future were about the possibility of a loan deal, newspaper Correio da Manhã says today that Sporting could end up buying the player.

It’s written that the Reds are demanding €5m for a sale, and the Lions actually believe this price could still be lower with a little more negotiation.

Correio da Manhã’s headline says that Sporting are planning to buy Camacho with money from the sale of Bruno Fernandes, who’s been disputed by Manchester City and Manchester United. 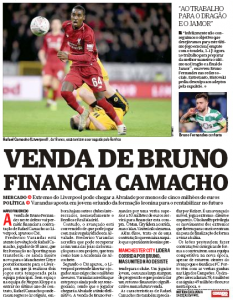 Although other big clubs such as Barcelona and Real Madrid are said to be after Camacho, the newspaper claims that the player knows he would have more playing time at Sporting.

And since having more minutes is the main reason why he would leave Liverpool in the first place, the Lions should have a real chance against the Spanish giants.