As the Turin media continues to make a big thing out of Juventus’ interest in Ruben Neves, the Portuguese press brings an interesting update today.

Newspaper Record mostly covers what comes from Italy, but managed to exclusively learn one simple fact: The Wolves midfielder would rather stay in the Premier League than move to Italy.

Record claims that Neves wants to continue in the place where he’s already wanted by Manchester City and Arsenal.

The rest of the story is mostly based on Tuttosport’s information, saying Juventus have met Jorge Mendes and discussed the midfielder’s situation at Wolverhampton. 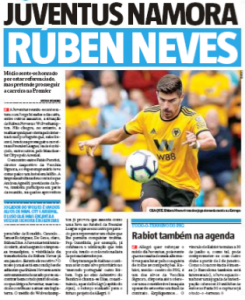 The outlet has claimed that Pep Guardiola’s side could be an ‘obstacle’ for Juventus in the race for the player.

So although Tuttosport seemed confident that Jorge Mendes’ relationship with Juve would help the Italian side, maybe Neves’ wish will have more importance in his future.