Newspaper Record says the Championship side are very satisfied with the midfielder’s form, and are making an attempt to buy him at the end of the season.

It’s claimed that the loan deal doesn’t include any kind of buying option for the Baggies, so the clubs would have to negotiate a new deal for that to happen.

West Brom and Benfica still need to start the official contacts, and only then can it be known if the Eagles are willing to sell Krovinovic. So it sounds like things are still in the very early stages. 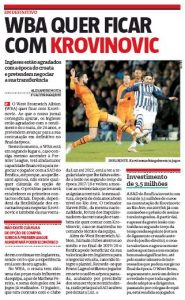 Record claims there are other clubs who are interested in Krovinovic, making him a valuable player in England, and therefore putting Benfica in a position where they can demand more money for the midfielder.

The newspaper doesn’t seem to know how much the Eagles will demand, but it’s fair to say that West Brom made a better deal for Matheus Pereira, since they set the buying price when getting him on loan at the start of the season.

This time, they should know how hard it is to negotiate with Portuguese clubs.