The Portuguese press continues to claim that Yannick Bolasie is returning to Everton at the end of the season.

These reports have around since February, with the player failing to impress during his loan spell at Sporting.

Now it’s time for newspaper A Bola to say it once again, claiming it’s the ‘end of the line’ for the 30-year-old at the Lisbon side.

Since Sporting have no intention of keeping Bolasie for the next season, it’s said the Lions are now unlikely to give him many chances to play for the club again. 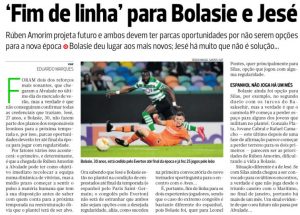 The winger even had a fair number of chances at the start of the season, having made 25 appearances for the Lions so far. But his little contribution to the team, with two goals and five assists, hasn’t convinced the club to fight to have him for longer.

It’s been previously claimed that the wages he has at Everton would be a problem in case of a permanent deal as well.

This isn’t great news for Marcel Brands, and if A Bola are correct, he’ll have to find a new home for Bolasie this summer.