Over the past couple of years the Portuguese press has somewhat adopted Wolves as their English team.

With the club doing so much business in Portugal via Jorge Mendes, Wolves were a regular in the country’s media even before everything started to go spectacularly well.

It’s no surprise other clubs have looked to follow the same route, and Sunday’s edition of O Jogo once again says that’s what Nottingham Forest are doing.

A few days ago we covered claims from another Portuguese newspaper, A Bola, which stated Nottingham Forest are ‘very probably’ signing Nikola Vukcevic and ‘the transfer could be made concrete soon’.

O Jogo doesn’t quite go that far, just saying the Championship club are ‘best placed’ to sign Braga’s 26 year old midfielder. It’s explained how important the player is to his club and that they want to get €10m from their 83% percentage of the his registration rights. 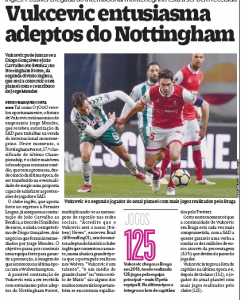 The Portuguese newspaper is enthused by the reaction of Forest fans and carries tweets from some, including ‘Brad’ @Bvsnffcsg01 who they claim stated Vukcevic could be the club’s Ruben Neves.

Nottingham Forest are now getting the full-on Portuguese treatment and will likely become another adopted club, alongside Wolves.