Nabil Fekir to Liverpool is pretty messy already, but there’s the chance Jean-Michel Aulas is set to play the Premier League club at what he likely believes is their own game.

Sunday’s edition of L’Equipe goes over the situation, and comments Aulas made on Saturday about reported interest from Real Madrid.

The Lyon president is quoted as saying: “Real interest? I think it’s true, he smiled. There is no discussion, but there is interest.”

L’Equipe go on to say: ‘Jean-Michel Aulas rarely releases information on a dossier that has not yet entered its concrete phase. And the interest of the Real, which already existed at the time of the negotiations with Liverpool, is limited, for the moment to an inquiry. But by making this information public, the Lyon leader seems to keep Nabil Fekir strategically in the transfer market, and it is certainly not trivial if he said that the exit of his player would be for €70m.’

The French newspaper also state on Fekir: ‘His departure for Liverpool seemed well recorded. But the leaders of the English club have alleged a problem with the medical visit to try to lower the transfer fee.’

Aulas just simply isn’t the type of club president to be walked all over, in fact he’s so far in the other direction that any attempt from Liverpool to go back on an agreed fee was always likely to result in a big reaction.

That perceived fears over Fekir’s knee were pushed to the public will have made Aulas all the angrier, and resulted in the outburst calling the deal off.

It’s possible that Fekir to Liverpool can be resurrected, but Aulas is going to want it on his terms and there’s clearly transfer games being played at the moment. 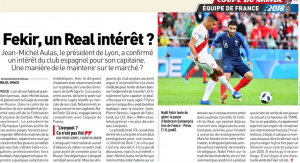 Are Real Madrid interested? There was a claim in the Spanish media this week, but it didn’t seem especially strong.

As well as having enemies around the transfer market, Aulas also has friends and has done big deals with both Barcelona and Real Madrid, managing to stay on good terms.