Home Premier League Everton “The dream was to have Adidas clothes” – Everton star explains how...
SHARE

When dreaming of making it as a footballer, many people would imagine the money, the houses, the adulation, the holidays on yachts costing more than a row of houses.

The Everton star has been speaking to L’Equipe about his route into football and his aims as a child, and it’s interesting stuff. Gueye came through the Diambars academy in Senegal and, like many other players, has a nice story about his trial to get there.

“I was thirteen or fourteen years old. I participated in a series of trials and the last three days was spent in Dakar. I understood that those who were chosen had yellow and blue bibs. And as I was in red, I thought, ‘It’s dead.’ My luck? There was only one game left and two guys were fighting to be in the middle so I went right back. And Jimmy Adjovi-Boco, on the edge of the pitch, appreciated me. He called me to join the yellow and blue.”

That was just the start of a road which would eventually see Gueye become the first Diambars product to sign a professional contract in Europe, and then end up at Everton.

The dreams began after the trial, but Gueye explained to L’Equipe his aims were more simple than most: “I was so happy because I thought I was going to stop school (laughs). The dream was to have Adidas clothes, not necessarily to be a pro. We were not aware of what it was. Upon arrival, I was warned: ‘Everyone dresses the same, no mobile phone, no difference.’

“Because some were richer than others. One of us was even a talibé, a beggar. He had never set foot in school, he started here at fourteen and has a good job in France today.”

The youngsters were all together with similar aims, and it created a strangely competitive atmosphere: “There were four of us in a room, and in my room there were the youngest ones. We had rituals like weighing, sizes. Every week, it was the competition for the one who was growing the most, who was gaining the most weight. In the evening, you ate a lot and did not go to the bathroom.”

Eventually, Diambars convinced Lille to take Gueye, but there was money exchanged.

The deal was they would pay if the footballer succeeded, and of course he did, and naturally those early years have left a mark: “Diambars is a family. Everything that touches one 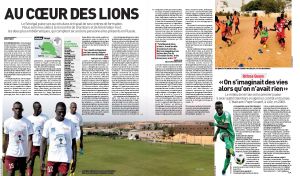 touches the other. I spent more time there than with my own family, five years without stopping, alone at that age. We talked about our dreams in the evening, we imagined lives when we had nothing. When I see this journey again… It’s beautiful.”

Senegal face Japan in the World Cup on Sunday evening, Everton’s Idrissa Gueye is expected to start. The kit will be Puma, Gueye’s boots? Adidas.