Home Europe Barcelona want to present two signings soon, and a third is on...
SHARE

The Catalan media seem increasingly convinced that Clement Lenglet to Barcelona is all sewn up and the deal will be announced soon.

In a transfer story which has been going on for months, Lenglet initially became the subject of Barca attention when the club were worried about Samuel Umtiti’s future, but the Sevilla defender having a €35m clause is proving all too tempting.

Lenglet himself was hesitant about the potential move, but on Sunday Mundo Deportivo again state the defender has been convinced and has given his approval to the summer transfer. Sevilla are said to be well aware of the situation and are looking for a replacement.

Mundo Deportivo say Barca won’t announce any signings until the beginning of July, and with the 1st being a Sunday any announcements are likely to start on July 2nd, which is a week on Monday. 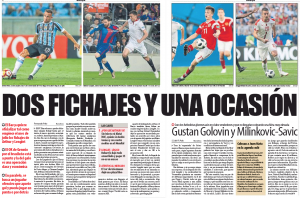 As well as wheeling out Lenglet, it’s expected Barca will also present Arthur, having brought the deal to sign the Brazilian forward. Arthur had initially been set to leave Gremio in January for Barcelona, but talks have been ongoing to secure an earlier move.

With those two deals now considered close, Barca are looking for an offensive player, having seen a deal to sign Antoine Griezmann fail.