Despite having a lot of coverage about Manchester United, especially since Cristiano Ronaldo’s return to the club, it’s a little rare for the Portuguese media to claim that they have exclusive information on the things that happen at the club.

Local outlets normally take information from the English media, always crediting, to talk about several situations, including the potential sacking of the Norwegian manager.

However, today, newspaper Record claims to have learned one thing or two regarding Solskjaer’s situation at Old Trafford.

The outlet writes that the Red Devils’ dressing room are currently ‘divided’, as there are those who want the manager out and those who ‘have faith in him’, meaning there’s no definitive consensus in the director board or in the dressing room about a decision.

According to the report, part of the club believe the ‘end of the line’ has come for Solskjaer, while others consider that the coach can ‘reverse the situation’. 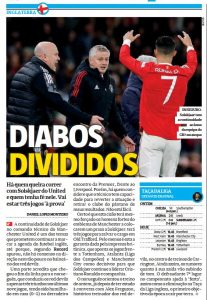 Record then takes information from the English press to say that Solskjaer should now three new challenges to save his job. Those are the matches against Tottenham Hotspur, Atalanta and Manchester City.