At the start of the week, Benfica president Luis Filipe Vieira said he’d rejected a January bid of €60m for striker Carlos Vinícius.

The president claimed he could make more with this transfer, and would’ve sold two players for €100m each if it wasn’t for the Coronavirus pandemic.

Today, newspaper Record says that bid was made by Wolverhampton Wanderers, and it’s actually still on the table.

It’s said Wolves continue to be willing to spend that much on the Brazilian striker, so his sale only depends on Benfica’s wish to let him go. 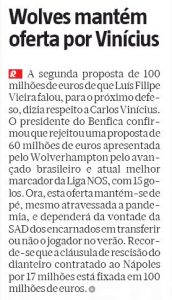 Record points out that Carlos Vinícius is protected by a release clause of €100m, and that’s why Luís Filipe Vieira said he could be sold for that amount.

Still, there are no claims that Wolves would raise their bid to the €100m. So that attempt would either be from another club or the president was exaggerating about how much Wolves would spend on the player.

Even the €60m feels like a push too far, and it’s very unlikely Wolves would pay such an amount unless a good percentage of it consisted of bonus payments.