You all know by now that Pedro, a faithful servant at Chelsea for the past five years, will be leaving Stamford Bridge in the summer.

He’s said so himself and the rumours about where he will move to next continue to circle.

At first, it was believed he would team up with Xavi in Qatar, but the trend now points towards him moving to Italy, where both AS Roma and, more recently, Juventus have been reported as interested.

It looked like the Rome based side would have a clear run at the Spaniard at first, but with Maurizio Sarri enjoying working with the former Barcelona star during his spell at Chelsea, stories about the Serie A champions making a move started to emerge.

Well, AS Roma now want to ensure they don’t miss out on the forward, and Il Tempo on Wednesday report they’ve ‘accelerated’ to try and get a deal over the line.

They make it clear just above the headline that an agreement has ‘practically’ been reached with the 32-year-old, but they have one hurdle to overcome first: offloading Justin Kluivert.

Those in charge at Roma are ‘confident’ they’ve got Pedro, ‘having done everything possible’ with the intermediary in charge of the transfer, and they are ‘breathing optimism’ at getting a deal over the line. 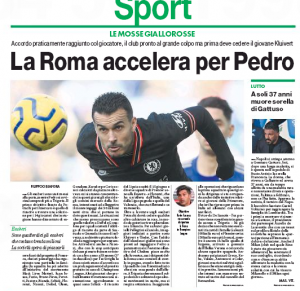 However, they need to sell before any new arrival, not because they need cash to pay for a transfer, but because their aim is to get rid of at least €30m/year in wages from getting rid of some players this summer.

We’ve already mentioned Kluivert, but there’s also the likes of Steven Nzonzi and Patrik Schick, as well as Alessandro Florenzi, who may or may not stay at Valencia.

Either way, Pedro to Roma is becoming a more serious matter, and it seems, at least according to Il Tempo, they’ve overtaken Juventus in the race to acquire his services.