Home Europe From Portugal: Doctor says André Gomes should be out for season, bad...
SHARE

The Portuguese press has obviously been following André Gomes’ injury close, with several updates about the Everton midfielder’s situation.

On Monday morning, they didn’t even wait for surgery to speculate on his recovery time. Radio Renascença interviewed a national team doctor who said it would take from three to five months for the player to get back on the pitch.

It was only in the afternoon that Everton announced the surgery was a success, but as they didn’t give a timetable for his recovery, the rumours about it shall continue.

Now it’s time for newspaper O Jogo to interview a doctor, with Domingos Gomes getting the stage today. And his forecast is that Gomes should spend a little more time on the sidelines. 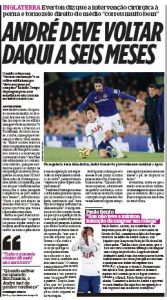 “The usual in these situations is a competitive break of at least six months,” said Domingos Gomes, who’s an orthopedist and used to work at Porto. “Anything under half a year will be profit.

“When recovering, André will have to gain confidence, both in terms of motor skills and psychologically. Sometimes it takes some time for a player to lose their fear of stepping in, of disputing the balls.”

With Gomes out for six months, that would basically rule him out for the rest of the season. But despite the many opinions of doctors here and there, we better wait for Everton to have more reliable information about his recovery.

There may not be a villain in this case, but there aren’t two victims, Son doesn’t need to be infantilised to the point we’re being updated on his well-being. https://t.co/YUhDVm407k #efc #coyb #thfc #coys

Tottenham target could be available for only €20m – Not expected...