Home Europe From Portugal: Defender would rather move to Lisbon than to Leeds United
SHARE

Sporting’s pursuit of Torino defender Lyanco has been getting big attention from the Portuguese press, since this would be an important signing for the Lions.

Newspaper A Bola writes that the club are meeting the player’s agent today, and are set to improve the first bid they made for him, which was €6m.

The outlet also says there’s some competition for his signing, and claim that Leeds United made an approach for the 23-year-old.

But Sporting are said to have an advantage in this race. It’s claimed that Lyanco would rather play in Portugal, for a club who will be playing the European competitions, instead of joining the Whites. 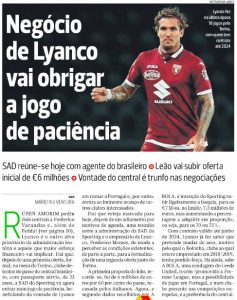 So it seems the Lions’ plan is to give Torino the possibility of making some profit in case of a future transfer. Perhaps in case Leeds United can make a bigger offer, they could end up getting the preference of both Torino and the player.