For the past few days, various reports coming out of the Portuguese press have continued insisting that Fulham and Sporting have reached an agreement for João Palhinha’s transfer.

It has also been stated Marco Silva convinced the midfielder to join the Cottagers this summer.

On Friday, A Bola reported the 26-year-old only had to sort out a few details with Fulham before sealing a move to the English capital club.

Palhinha has been on holiday in the Maldives and will return to Lisbon today. That’s according to A Bola on Saturday, who add that he will not stay there long and ‘should leave for London’ in the next few days to seal a move to the Fulham.

It’s been an ‘early return’ because the newly promoted Premier League side are waiting to make the Portugal international their new addition. After reaching total agreement with Sporting, it was necessary for Silva’s side to sort out the final details with the player.

A Bola explain the two parties overcame these differences on Friday, specifically related to his salary and length of contract. 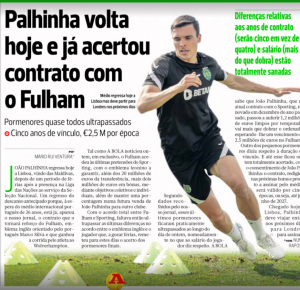 Palhinha will see his wages doubled from €1.2m to €2.5m per year at Fulham.

Following the agreement on Friday, with his consent, the deal will last for five seasons.

The newspaper explains the contract will be ‘drawn up in the next few hours and ready to be signed by the midfielder’.