There’s now a ‘total agreement’ between Fulham and Sporting for the transfer of João Palhinha, according to the latest claims from Portugal.

Newspaper A Bola today writes the deal is ‘closed’, and it turns out the midfielder is moving for a little more than initially expected.

It’s said Fulham are initially paying €20m, plus €2m in performance bonuses which are ‘easily achievable’, especially if they stay in the Premier League for one more season. Sporting are also said to have a percentage of a future sale.

Even though it’s already been claimed Palhinha will double his wages, from €1.2m net to €2.5m per season, it’s said the Cottagers and he still have a few details to sort out before the contract is signed. 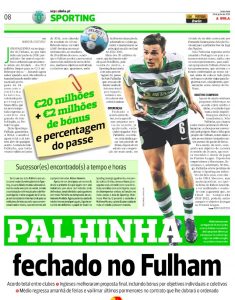 The midfielder is still on holiday, and is set to return to Portugal on Saturday. According to A Bola, he’ll sit with his representatives to analyse Fulham’s offer ‘next week’ and discuss those final details.

Only then Palhinha will travel to England and sign a deal which is expected to run until the summer of 2026.

The newspaper claims the player came close to joining Wolves, and ended up being ‘convinced’ by Marco Silva to move to London instead.

“Liverpool are a team I’d play for” – Brazilian midfielder reveals...

Leeds United ‘near double hit’ – Two signings ‘one step away’...