Yohan Cabaye’s contract at Crystal Palace runs out this summer and the midfielder’s failure to sign a new deal would see him leave the Eagles as a free agent.

That’s unlikely to happen if a report from today’s French newspaper, L’Equipe is to be believed. The former Newcastle United player could commit his future to Palace by signing an extension.

Cabaye’s agent will travel to London and meet with Palace next week. The terms of the extension will be discussed, in order to keep the France international at Selhurst Park.

Crystal Palace manager Roy Hodgson is also impressed with Cabaye’s performance level. The 32-year-old played an important role in helping the club move from the bottom of the table and finish the season in 11th spot. 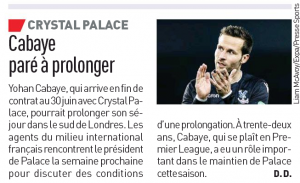 Whilst there have been recent rumours of a move in the English media, there’s been nothing in France to suggest Cabaye has been speaking with other clubs, and this situation looks promising for Crystal Palace.