Mundo Deportivo reported on Wednesday that Sevilla defender Clement Lenglet has agreed to join Barcelona on a five year deal.

Spanish newspaper Marca has now denied those claims and suggested the deal for the central defender is not so close. They report that are other issues than Lenglet that demand more attention.

This includes extending Samuel Umtiti’s current deal at the Camp Nou. The France international’s contract with the Catalan club will run down in 2021 and has a release clause of €60m.

Umtiti’s display has attracted interest from “several clubs” and it won’t be any trouble for top sides to pay the clause.

Barcelona technical secretary Robert Fernandez shares a very good relationship with Umtiti’s brother and agent, Yannick. The La Liga club hope this can help convince the player to sign an extension as they remain focused on securing the former Lyon star’s future.

Barcelona are aware the defender could draw more attention if he impresses in Russia. Therefore, they  are trying to complete the deal before the player travels with the France squad for the 2018 World Cup. 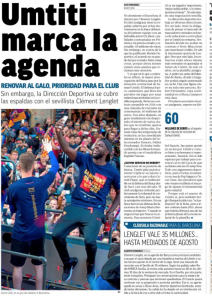 Umtiti has informed Barcelona that he wants his wages tripled so that his salary will be closer to what Gerard Pique earns at the club. The Spanish champions understands the player’s desire to earn more, but not to such an extent where it will be difficult for them to meet the player’s demands.

It should be seen whether Barcelona and Umtiti can find a solution or not before the World Cup.