Earlier today we covered claims from Marca which rubbished the idea of Nelson Semedo being close to signing for Manchester City.

It was explained there has been contact, with the Barcelona player being offered to City, as he also was in the January window, but Pep Guardiola’s side are not yet jumping at the chance to sign him.

Sunday’s edition of Mundo Deportivo also covers the situation, and it may now be clearer what’s going on here. They state Joao Cancelo ‘wants to leave’ Manchester City, and that Pep Guardiola isn’t happy with the player anyway.

Cancelo has long been on Barca’s radar, so the opportunity is of interest to them.

Mundo Deportivo once again state Semedo wants to join Manchester City ahead of other options, and that a swap deal could be the solution.

Reading between the lines, it would appear that Jorge Mendes is trying to build a deal. He 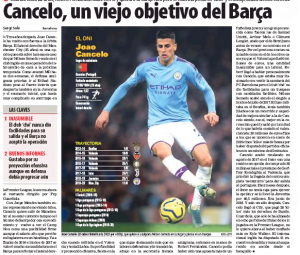 represents two players who may well wish to be elsewhere, and is working with the instruction of Barcelona’s interest in Cancelo.

So Semedo may want the move to happen, and Cancelo and Barcelona could feel the same, yet it’s the Manchester City domino which hasn’t yet fallen.