Since Carlo Ancelotti moved to Goodison Park, Everton have been linked to a long list of Serie A players.

The Toffees have especially been linked to Napoli players, which Ancelotti having been manager there at the start of this season. And of all the players linked, Allan has easily been the subject of most reports.

Now Arsenal could make it harder for their Premier League rivals to sign the midfielder, with Sunday’s edition of Mundo Deportivo saying Allan could be off to Atletico Madrid if the Gunners sign Thomas Partey. 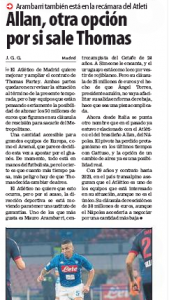 Given he has a €50m buyout clause, there’s not a lot Atletico could do about it.

Atletico could then take that €50m and use it to sign Allan, frustrating any Everton attempts to get the Brazilian for themselves.