It’s fair to say Thomas Lemar isn’t having a great start to the season for AS Monaco.

Since his brilliant performance for France against the Netherlands on deadline day, Lemar hasn’t notched a single goal or assist, and his all round performances aren’t of someone contributing lots in other ways but failing to hit the mark.

A hamstring issue hasn’t helped Lemar, but it would perhaps be taking excuses too far to point that out as the only reason. The 21 year old reached something of a zenith with the later interest of Liverpool and Arsenal in August, and huge offers from both clubs, with that then being underlined by the Dutch match… and since then it’s been hard to get anywhere near those heights.

That was always going to be difficult. All of a sudden Lemar was one of the most talked about footballers on the planet, which probably didn’t match the reality of the player’s level.

At 21 years of age he’s very much entitled to ups and downs, even prolonged ones, but when valuing a player at around €100m the expectations obviously rise.

L’Equipe say Lemar’s Monaco place isn’t in danger because the club aren’t blessed with a great deal of options for his position, which is part of the reason they knocked back 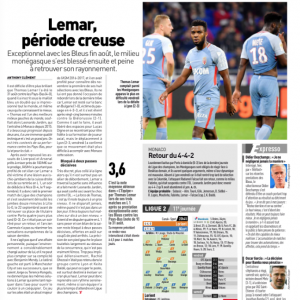 Arsenal at the end of the window.

Lemar was always going to be one of the harder to sign Monaco players, something Arsene Wenger must have been well aware of.

But if Arsenal cobbled together a €100m offer in January, it would have to provide serious thinking for Monaco. If the youngster continues to struggle then turning down a huge Arsenal offer again would be doubly difficult, with it perhaps being felt that Lemar needs that boost of a change.

Things could change very quickly for Lemar, and the Arsenal target could once again be the subject of attention for brilliant performances, rather than average ones, but that’s all down to the player.