West Ham fans, we’ve got an old school A Bola story for you this Wednesday. For those who are not familiar with it, it’s the kind of article which tries to sound sure that a transfer is happening, but holds back a little.

A headline from the newspaper today says: ‘Marega sold’. Then come the sentences: ‘Striker leaving to English football’, ‘West Ham have always been interested’ and ‘Deal should make €40m’.

It obviously makes it sound like Moussa Marega is joining the Hammers on a €40m deal, but the text is not 100% sure about it.

A Bola guarantees that Marega is leaving for that amount, which is the same as his release clause, but then says the ‘most likely’ club to get him are West Ham. 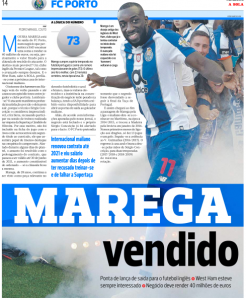 ‘The most likely destination? An English Premier League club, as the striker has always wanted. And West Ham, A Bola knows, profiles as the next home of the Malian international.’

The newspaper recalls that West Ham tried to sign the player last summer, when he rebelled against Porto for not letting him go, and ended up getting a new contract. Now the London side kept insisting on his signing, and are apparently close to getting him.

A Bola repeats that the agreement is done and claims that even manager Sérgio Conceição knows about it. But given our experience covering this kind of story, we would tell West Ham fans to not to hold their breath… just yet.