This is what we were greeted with when we opened Gazzetta dello Sport on Wednesday, as the Italian newspaper dedicate a whole page to the exclusive that Chelsea will sack Maurizio Sarri after the Europa League final, regardless of the result.

The story comes after a rollercoaster of a first season for the former Napoli manager, whose strong opinions have divided the club, to the point where Roman Abramovich is said to ‘not like’ the Italian, and, as we all know, if the Russian oligarch falls out with his club’s manager, it means a swift exit, regardless of the price.

It seems Sarri has been aware of this feeling for a while, even alluding to it after the season ended, and Gazzetta make it clear the reasons behind this decision are not football related.

The atmosphere surrounding the club throughout the 2018-19 campaign is at the heart of it all, with a ‘large chunk of fans’ against Sarri’s character, a mood ‘conditioned’ by an ’unprecedented media bombardment’. 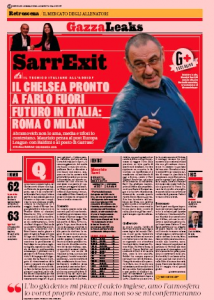 Gazzetta defend the Italian, explaining the very reason why he has divided the Stamford Bridge community is why he’s made it to the top: his ‘iron backbone’.

Basically, if he has something to say, he will say it, which is exactly what happened when he questioned Wednesday’s friendly against New England Revolution, which comes at a time when the club should be preparing for the biggest game of their season: a Europa League final.

This divide behind the scenes at Chelsea has caused Sarri to do the natural thing: consider his options.

Exiting London would open up two paths for him, one leading to Milan, where he could replace Gennaro Gattuso, the other to Roma, where he is liked by the club president’s advisor, Franco Baldini, and would take over from Claudio Ranieri.

These are the two clubs said to be ‘following with attention’ Sarri’s situation at Stamford Bridge, clearly ready to pounce if Chelsea pull the plug on their relationship with the former Napoli manager.

Manchester United said to have already made approach for midfielder summer...