Earlier today, we covered a confusing story from A Bola which said Moussa Marega could be leaving Porto to join West Ham in a €40m deal.

The newspaper made it clear that the striker is leaving the Dragons, but didn’t show any conviction when talking about the Hammers.

Now it turns out that local Porto newspaper O Jogo brings a similar story which sounds a lot better to understand the situation.

The outlet claims that Porto did receive a €30m bid from an English club for Marega. But they also make it clear they are not sure of who this club are, and the Dragons are waiting for the offer to be improved. 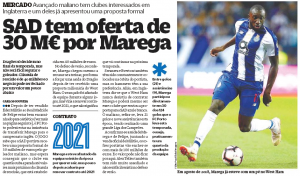 O Jogo recalls Marega’s wish to leave for West Ham last summer, and says the Hammers still have the player’s preference. And given the news from England saying the London side still want the striker, the newspaper says this bid ‘could be coming from them’.

However, they also recall rumours which say that Swansea City and Everton are also keen on the striker, and that’s why it’s claimed there are ‘several’ British sides who could be going for the 28-year-old.

He’s clearly not going to Swansea, that much is certain. The link will be from old claims when the Welsh club were in the Premier League.

O Jogo says Porto haven’t decided about Marega’s future yet, but it will be hard to hold him, even for a bid of a little less than his €40m release clause.

So with A Bola saying the player is ‘sold’ and O Jogo being more careful, it depends on your excitement to believe who’s telling the truth.