According to a report in the Portuguese media, Diogo Dalot will have a medical next week ahead of his move to Manchester United.

A Bola go with a headline reading ‘Tests for Dalot’, showing they feel a medical is happening imminently.

Yesterday it was reported the FC Porto defender was on the verge of joining the Premier League.

A Bola today report Dalot will undergo his medical with Manchester United and it’s then expected his transfer will be officially announced by the English club.

These latest developments come after reports terms have been agreed with the youngster to head to Old Trafford this summer.

We covered claims yesterday from Portugal that Dalot will sign a five year contract with Manchester United.

It’s claimed the two clubs have agreed on a transfer fee in the region of €24m despite the full back having a buyout clause of €20m. 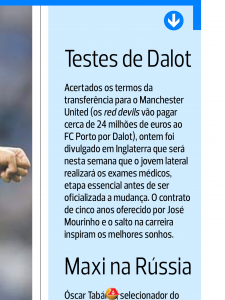 There was a concern Dalot could leave Porto on bad terms and subsequently Manchester United are prepared to pay extra.

Once the deal goes through Porto will inform the CMVM and notify the Securities Market Commission.