Home Premier League Liverpool Offer of €30-35m is enough for Liverpool to get their man and...
SHARE

According a claim in the Spanish media Liverpool are showing an interest in Barcelona goalkeeper Jasper Cillessen.

Liverpool’s problems in this position are well documented and it seems Jurgen Klopp will look to address this.

With Loris Karius’ costly errors in last weekends Champions League final the Premier League side could be looking to bring in a top class keeper this summer.

Marca report Liverpool are monitoring the situation with the Netherlands international and could look to make an offer for the 29 year old. Cillessen has a €60m buyout clause with Barcelona, but Marca believe they could be tempted with an offer in the region of €30-€35m.

The Catalan media have suggested otherwise, but for Marca, €30-35m is enough for Liverpool to get their man, and that sounds about right.

Cillessen himself could be looking for more first team football after being back up to Marc-André Ter Stegen during his time at the Camp Nou. 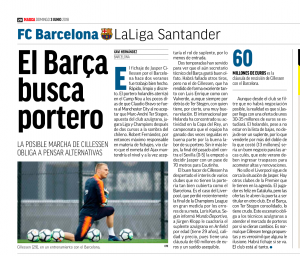 The Dutchman has had to be content mainly with Copa del Rey appearances and Liverpool could offer him Champions League football next season.

The player is contracted to Barcelona until June 2021.