Everton striker Cenk Tosun has played down reports in the Turkish press that he’s set for a return to Besiktas.

The Turkish international has been linked with the Istanbul club in recent weeks, just 11 months after arriving at Goodison Park.

According to Milliyet, the Everton player has told close friends he’s going nowhere, and the player is paraphrased as saying: “Besiktas is my home. However, I have a new page in my career and I am at Everton. Beskitas’ interest is just gossip.”

Tosun started the season in the starting line-up but for now he’s lost his place to Richarlison after Marco Silva took the decision to play the young Brazilian down the middle.

His exclusion from the team has resulted in claims in the Turkish media that Besiktas could look to loan him back in the next transfer window and that an offer has been tabled.

The Istanbul club have made it their priority to sign a No.9 in the new year after losing Tosun and Alvaro Negredo in the past 11 months. 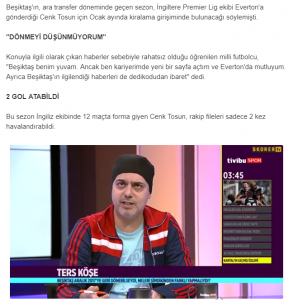 The forward’s transfer to Everton was a record for a Super Lig player when he joined the Merseyside club in January.

There’s a lot of love at Besiktas for Tosun and there’ll be rumours about him returning until he either does, or retires from the game.