Home Championship AFC Bournemouth Player ‘on the way’ to Bournemouth, travelled to England for medical
SHARE

The headline of the report reads, ‘Danjuma on the way to Bournemouth’ and that’s further backed up within the story.

He’s already made up his mind to leave the Jupiler Pro League side this summer and it looks like his wish is to be fulfilled.

It’s claimed the 22-year-old has travelled to England to undergo his medical with Eddie Howe’s side. However, that does not mean there is an agreement in place between the two clubs for the winger.

In England, there are claims the deal could be concluded for €15m including bonuses. Brugge, on the other hand, are looking for a fee of around €20m for the Nigeria-born Netherlands international. 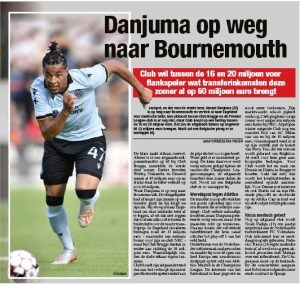 HBVL are of the belief the two clubs will meet in-between to find an agreement for Danjuma.

The youngster made 24 appearances in all competitions for Club Brugge last season, scoring six goals and registering four assists in the process.