Steven Defour is in his final year of his contract at Burnley and is currently working on getting fit to return to the pitch.

However, it has not stopped him from being linked with a move away from Turf Moor.

On August 15th, Het Laatste Nieuws explained that Antwerp could be interested in the midfielder.

HLN now provides a latest update and the report’s headline is titled, ‘Antwerp talks to Defour and wants to focus’

The player is ‘not reluctant’ to the idea of returning to his homeland and Sean Dyche’s side are also willing to negotiate, if the price is right.

D’Onofrio is aware Burnley are not in a ‘strong position’ and is waiting patiently. There’s no explanation as to why the Clarets don’t have an advantage here, but it possibly be down to the duration left in Defour’s contract.

HLN claim the feeling among all parties involved is that there is more chance of a deal taking shape at the end of this month. 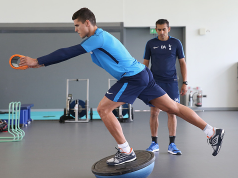 Fulham player seen as ‘best midfielder’ in the league – ‘Truly...