This means Pep Guardiola has Aymeric Laporte, John Stones and Nicolás Otamendi as the only three recognised centre-backs in the squad and the Etihad club decided against bringing in a new player in the same position in the recently concluded window.

According to Sport, Eric Garcia is a ‘great beneficiary’ of City’s summer transfer strategy.

It’s claimed the 18-year-old is the most ‘prominent defender’ in the academy and his qualities make him standout among City’s technical staff, and after having impressed Guaridola in the pre-season, the teenager is predicted an important role. 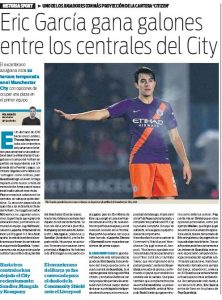 The defender cannot be dissatisfied with the progression he has had since arriving in England in 2017 and he frequently trained under the guidance of Guardiola last season.

Guardiola is also thinking of using Fernandinho as a centre-back, especially after strengthening the defensive midfield position by signing Rodri.