Kevin Mbabu has been featuring regularly for Young Boys in all competitions since the right-back returned to Switzerland following his disappointing spell at Newcastle United.

Having signed the fullback from Servette in 2013, he struggled for regular playing time due to injury woes and poor form.

The Swiss club initially took the 23-year-old on a season-long loan in 2016 before making his transfer permanent a year later.

Neue Zürcher Zeitung sat down for an interview with the player and he explained in detail as why joining the Tyneside club at a young age was not a good choice for his career.

“I was not yet 18, and left Geneva [Servette] for Newcastle. I also rejected Arsenal. England was not a success for me, but I learned a lot there,” he explained.

“Mentally, I was tested enormously. I was injured in England for almost two of the three and a half years, and I had muscle problems all the time. Six, seven injuries.

“Physically, my body wasn’t ready for the intensity in Newcastle training. I did not have the best lifestyle and was too busy with too many things.

“These can be reasons for injuries. Today I try not to repeat the mistakes. Development shows me that I am not on the wrong track.”

Despite his past struggles, Mbabu has not given up on returning to the Premier League in the future.

“My dream is to return to the Premier League. But in life, sometimes it does not work the way you want. Every way is different,” the Swiss international said. 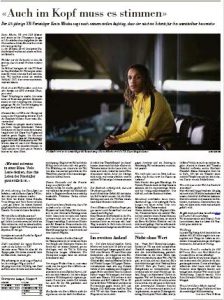 Young Boys will face Juventus in their last group stage fixture of the Champions League on Wednesday evening, which will be Mbabu and his side’s last outing in the European competition this season.