Home Europe Barcelona ready to offer own player as part of deal, club ‘only...
SHARE

Over the last few weeks, the Catalan media was split as to whether Ajax defender Matthijs de Ligt or his teammate Frenkie de Jong was the priority target for Barcelona.

Journalist Miguel Rico, writing for Mundo Deportivo, claims the Blaugrana were split until yesterday, but they now understand it is important for them to try and sign both the players, who would cost €150m next summer.

The asking price for the duo will not be trouble for the likes of Manchester City and Paris Saint-Germain to match, who are also after them.

It’s claimed the Catalan club’s style of play and the work done by former technical secretary Robert Fernandez last year, along with other key factors, gives the Spanish champions an advantage in signing the two players.

However, the centre-back and midfielder will decide their future destination.

The report mentions that sources from Amsterdam have informed the La Liga winners that PSG and Bayern Munich have already negotiated with the Eredivisie outfit. 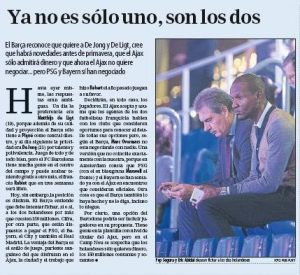 Rico mentions one of the options available for Barca is to offer one of their own players as part of the deal to sign De Ligt and De Jong.

However, he suspects the Dutch outfit may not accept the offer because they ‘only want money’, which is €150m for the two Netherlands internationals.