The Ibai Gomez story is building in the Spanish media again, but Alaves haven’t given up hope of hanging on to their asset.

With a contract ending on June 30th, there’s the danger of losing the player for nothing if he doesn’t renew and isn’t sold during the winter market.

AS today reported that Athletic Club Bilbao and Leeds United remain keen and both are expected to return during the January window to try and get a deal done.

Alaves, however, have thought up a plan. The club’s chief Josean Querejeta is aware they can’t compete with others on wages, so has wanted to attract Fernando Llorente on loan, in an attempt to convince Gomez to snub Leeds and others, and stay at the club.

Athletic Club are themselves also being linked strongly with the Tottenham player. 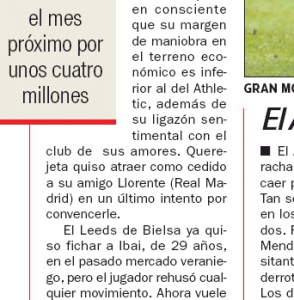 For Alaves, they’d have to convince Spurs and Llorente, which won’t be easy, and then hope that has the desired impact on Gomez… it’s a long shot.

Of course, this is bound to lead to further rumours about Leeds themselves possibly going for Llorente, which would also be a very difficult task.