On Monday, we relayed news from Spain that Arsenal are looking to sign Denis Suarez and Malcom from Barcelona on a loan deal with an option to buy.

Sport has an update about the Brazilian in today’s edition of the Catalan newspaper as they claim the winger has three offers to leave the Camp Nou in the mid-season transfer window.

Having joined the La Liga winners from Bordeuax before the start of the campaign, the 21-year-old has struggled for minutes, which is why his agent has handled the offers he’s received so far this month.

Chinese club Guangzhou Evergrande wanted to land the wideman and were willing to pay €50m to Barca, but the South American is not interested in making a switch to the Far East.

Malcom wants to continue in Europe, which is why he is ‘much more interested’ in accepting the proposal from either the north London club or AC Milan. 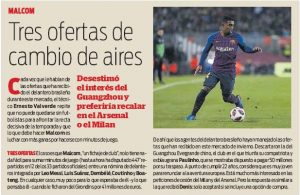 Barcelona are ready to sanction Malcom’s loan transfer, if a purchase option is included as a part of the deal and the player ‘prefers’ Arsenal over other clubs.