Neil Warnock wants to strengthen his squad before the close of the window and Cardiff City have identified Wesley Moraes as a target, if a report from Belgian newspaper Het Nieuwsblad is to be believed.

It’s explained the Brazilian is on the list of the Bluebirds, while there are other clubs from the top flight club competition in England who are interested in the Club Brugge star.

The Jupiler Pro League side received a €20m bid from a side in the Premier League during this window, although the name of that club hasn’t been made official.

However, even an offer that big was deemed insufficient by Brugge as they are demanding €30m to part ways with Wesley this month, something which Cardiff are said to be unwilling to pay. 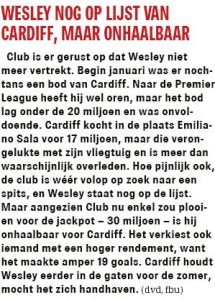 Cardiff will continue to keep a close eye on Wesley and will consider making an approach in the summer, if they avoid relegation to the Championship.