Earlier in the January window, Barcelona’s Malcom was linked with a possible loan move to the Premier League, with both Arsenal and Tottenham linked.

Those claims were inevitably carried on by the English media, and have ended up back in Spain today.

Monday’s edition of Sport references the English claims, and then explains the potential Arsenal situation for Malcom, and where the Denis Suarez saga sits right now.

The Catalan newspaper say that Arsenal are still negotiating with Barcelona for Suarez, it’s not considered completely dead.

Barca’s position seems to have hardened, with it now claimed they only want an outright sale or a loan with obligatory purchase clause of ‘not less’ than €20m.

That may suggest the idea of a renewal has gone out of the window. 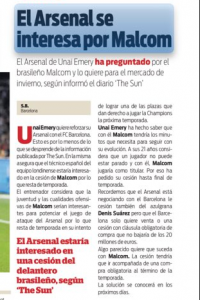 Sport say it would have to be ‘something similar’ for Malcom, a loan with a purchase obligation.

With only 118 minutes of La Liga football so far this season, and 30 minutes in the Champions League, the 21 year old Brazilian is likely frustrated.

Despite what Sport say, a straight loan may be achievable for Malcom, given that his contract lasts all the way to 2023.

The ‘solution’ on both cases will be known ‘in the coming days’.

Basically, Inter would accept a loan without automatic redemption, but with clauses which made redemption pretty much automatic.