Unlike Aston Villa and Norwich City, Sheffield United are yet to really get their summer transfer spending underway.

The Blades will have to improve their squad after securing promotion last season but so far, Phil Jagielka and Luke Freeman are the only arrivals.

Chris Wilder will want to add to those two and it seems signing a new central midfielder could be at the top of his list.

According to L’Equipe, the Blades are looking at Bordeaux midfielder Younousse Sankharé this summer.

The newspaper says the 29-year-old is ‘much appreciated’ by Wilder and his team, suggesting that a bid could be incoming at some point.

They don’t cite what sort of fee would be involved, or even whether initial contact has 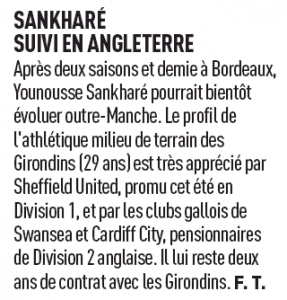 been made with the Ligue 1 side, just that he is a player Sheffield United have an interest in.

The Blades not his only potential destination in the UK, though, with Swansea and Cardiff also interested in the midfielder, although there’s clearly an advantage for the Premier League club.