Widely expected to sign for Bologna in Serie A, Andreas Skov Olsen hasn’t done that yet, and there’s a bit of worry about the delay.

The young Dane was awaited in Italy to finalise the move, but, as of yet, he hasn’t given his final decision, and he isn’t expected to do so before Saturday at the earliest.

And, for lack of a better reason for the delay, there’s now whispers that Tottenham might be the reason as to why everything is being held up.

According to Gazzetta dello Sport, ‘Danish sources are speculating’ that Spurs have inserted themselves in the mix. 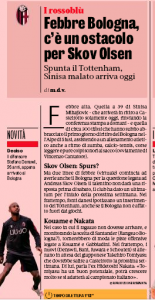 This isn’t the first time Daniel Levy and co. have been mentioned alongside the FC Nordsjaelland youngster, and although they hadn’t made a concrete move back in June, this might be the moment they do.

Bologna, fed up of waiting around, have issued Olsen an ultimatum of giving them a reply by the beginning of next week.

That gives Spurs plenty of time to do something over the weekend if they are indeed preparing something behind the scenes.