Last weekend, Mundo Deportivo reported that Barcelona president Josep Maria Bartomeu and CEO Òscar Grau will lead their side’s delegation at the general assembly of the European Clubs Association that is to be held in Amsterdam on March 25th and 26th.

It was also explained that it would be feasible for the Blaugrana leaders to meet their Ajax counterparts to discuss the potential transfer of Matthijs De Ligt.

On the front page of today’s edition of Sport, it reads ‘De Ligt very close’ following the meeting between Bartomeu and Ajax CEO Edwin van der Sar in Amsterdam.

So far, no deal has been agreed between the two sides as there are other clubs like Juventus and Paris Saint-Germain still in the race for the centre-back.

The Serie A outfit were close to signing him a few weeks ago, while the French champions submitted a lucrative offer to tempt the player to join them. 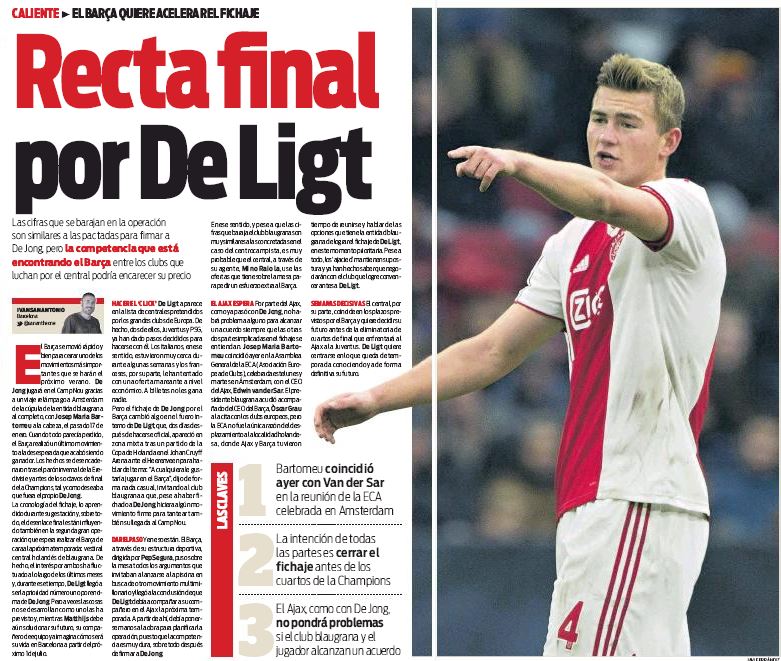 However, the Catalan club have an advantage in the race for De Ligt following their acquisition of his club and country teammate Frenkie de Jong.

Barcelona agreed a €75m plus €11m in variables deal with Ajax for the midfielder and the numbers could be similar for them to sign the defender.

Sport claims the Eredivisie side will have ‘no problem’ to find an agreement with Barca for the 19-year-old as long as the other two parties involved in the deal are on the same page. 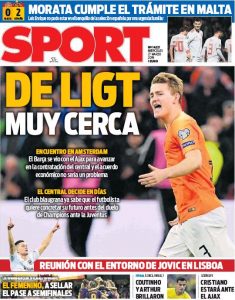 Ajax will face Juventus in the Champions League quarter-final in April and they want De Ligt’s future to be resolved before the European tie so that the teenager can focus on the remainder of the season.

The next two weeks will be decisive for Barcelona in their efforts to sign De Ligt.