Home Europe Liverpool player ‘has been seduced’ by other club, but feelings for Klopp...
SHARE

Another day, and more Sadio Mane claims from Spain.

El Confidencial have referenced Real Madrid interest again, as they have done several times over the past week, and Marca also continue to push it.

The Liverpool player was on the front page of their Monday edition. On Tuesday, they had an article explaining just why Zinedine Zidane is such a big fan. On Wednesday, they explain that the player is somewhat tempted by a move to Real Madrid.

Having already tried to get comment from the player’s entourage, the Spanish newspaper say neither they nor the player want to talk about a possible transfer until the end of the season, so concentrated is Mane on achieving glory with Liverpool.

However, it’s stated the footballer ‘has been seduced’ by the prospect of playing for Zidane.

Then Marca have a claim which will be welcomed even by Liverpool fans. They explain 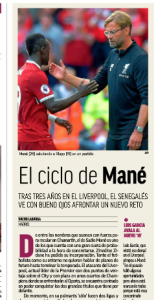 that whilst being tempted by Madrid, Mane is very attached to Jurgen Klopp, and add: ‘That admiration could stop his departure to any other destination’

They then swing the other way again: ‘But, in the case of Madrid, Zizou’s magnetism could be definitive when it comes to making a decision.’

Again, there’s no talk of price or even what Liverpool potentially make of all of this, and that could be when this Real Madrid transfer wish hits a brick wall.