Since Barcelona agreed a deal with Ajax for Frenkie de Jong in January, reports linking his teammate Matthijs de Ligt with a move to the Camp Nou have only intensified.

The 19-year-old has reportedly expressed his desire to join the Catalan side and should the La Liga winners seal the deal for the defender’s transfer, then it could raise a few questions on Samuel Umtiti’s future.

And Manchester City have been pulled in.

Wednesday’s edition of Spanish newspaper AS claims the 25-year-old’s future is far away from the Blaugrana and he has a market throughout Europe.

During the ongoing international break, the France international made it clear he plans to stay Barcelona beyond the summer transfer window.

However, within the club, there is a conviction the best option is to offload him due to Clement Lenglet’s excellent performance and the World Cup winner’s injury woes this season.

AS explains that Ernesto Valverde’s side are aware of the growing interest from the Premier League and Manchester City and Manchester United gets a mention. 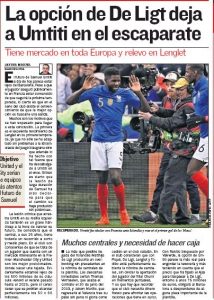 Pep Guardiola’s side are ‘best positioned’ in the race to sign Umtiti, whose contract at Barca is until 2023, with a €500m clause.

No interested club will be ready to pay the aforementioned figure for the defender and the report says a fee of €50-€60m could be sufficient to convince Barcelona to sanction Umtiti’s sale.