The Catalan media are becoming obsessed with the idea of Lautaro Martinez signing for Barcelona this summer.

There are now daily reports on the matter, and it’s being repeatedly claimed the Inter Milan striker fancies a move to the Camp Nou, and has pushed aside competition, including claimed interest from Chelsea and other Premier League clubs, for them.

Sport’s Tuesday edition reports Inter are so aware Martinez could be leaving them for Barcelona, that they’ve started to look for someone to replace him, but Liverpool are presented as a problem for them in that regard.

Timo Werner is one of the options being considered, however, it’s stated he’s ‘already very close’ to a Liverpool transfer, which would of course be an issue for Inter.

Similar has been claimed in the German and English sport media, yet, as we’ve repeatedly pointed out, it’s always felt more like Werner wanting Liverpool, rather than Jurgen Klopp’s side making any real attempts to sign the player. 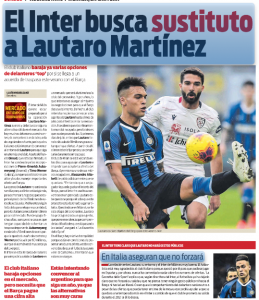 It would be no surprise to see further claims on the potential transfer in Wednesday’s edition of SportBild, with them reporting on Werner to Liverpool for over a year.

Other options for Inter include Arsenal’s Pierre-Emerick Aubameyang and Chelsea’s Olivier Giroud.